Some of his accomplishments include:

Catcher was born and raised in Altoona, PA where he started playing hockey when he was 9 years old for the Altoona Trackers.  Throughout the years he played travel hockey for the Mid-State Mustangs and Altoona Trackers. He was a part of the 2016 Western PA State Championship Team, where they went on to compete in the National Championship Tournament in Amherst, New York. During that same season his team won their Regional Silver Stick Tournament in West Chester, PA where they went on to compete in the International Tournament in Sarnia, Ontario, Canada. He was also a member of the Altoona Mt. Lion high school scholastic team.

In college, Catcher played for the Penn State Altoona hockey and baseball teams. He was part of the 2018 CHE championship team and also served as Captain of the hockey team during the 2018-19 season.  During his time on the baseball team, Catcher received the Male Scholar Athlete award in 2019, along with being voted as the 2021 conference player of the year.

Catcher is excited to be back with Mid-State Mustangs as a member of the coaching staff. He’s hoping to continue the rich tradition of development and success the Mustangs are built upon. He aspires to inspire each player he comes across just as coaches in the past have done for him. 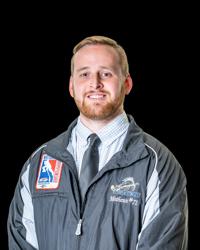 Born and raised in Altoona, PA, Derek Mathews has been around the game of hockey since he learned to skate at the age of four at Penn State.  As Galactic Ice was not open yet, he played roller hockey at Sir Skate along with the Stingers travel program until 2000.  When Galactic Ice opened, Derek was part of the first Squirt team as a nine year old in the Altoona Trackers program.  Coming up through the ranks and adding several banners for the Trackers program, he was also a key member of the Mid-State Mustangs program.  Mathews was a part of the first two U18 AA PA State Championship teams (one with the Trackers in 2008 and one with the Mustangs in 2010).  Mathews also played for the Altoona Mountain Lion Junior High and High School teams.  He was part of the only high school team out of Galactic Ice to play PIHL Varsity AAA during his junior year.

After graduating high school, Mathews played collegiate hockey at West Chester University for their D2 program.  Mathews won two conference championships during his time at the program and also was selected for the National D2 All-Star Challenge tournament (which is played every two years) both times.  He left WCU as their D2 all-time leading scorer and graduated with a degree in Middle Grades Education with concentrations in Mathematics and Social Studies.  Derek currently teaches 7th grade Math at Tyrone Area Middle School. 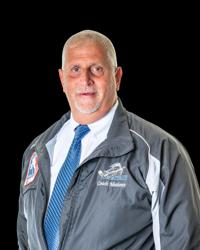 Tom has been involved in youth sports in the Altoona area for the last twenty-five years including baseball, soccer, roller hockey and ice hockey.  When Galactic Ice opened in 1999, he was the head coach for the first Tracker Squirt team.  For the next seven years he was the head coach for various A Major and AA Tracker teams up to the midget level.  At that point he then became an assist coach under Dave Weaver on the Midget AA Tracker team gaining further experience.  He also coached on various levels of other Tracker teams at the same time.

Paralleling the Tracker organization, he was part of the founding teams for the Mid-State Mustangs, both as a head coach and an assistant coach.  Also during this time span, he also was instrumental in starting the first Altoona High Area High School Junior and Senior High teams.  He spent 13 years coaching within that association.

After his son moved on to play college hockey, he spent the next seven years as an assistant coach for various Tracker Bantam and Midget teams as a way to give back to organization that provided his son such a positive experience.

Some accomplishments achieved along the way were, eight PAHL Tracker banners, multiple tournament victories, a Mid-State Mustangs State title at Midget AA, which included a trip to compete at the USA Hockey Nationals.   He was selected as Head coach of a PIHL High School All-Star team in 2008.   Coached the only local High School team to play AAA hockey in the PIHL.  Coached in nearly 1000 ice hockey games.  Attended every game his son played in a five year span at the West Chester University D2 program, while still traveling with an Altoona Tracker and Altoona High School team for five years, which involved multiple games a week from Ohio to New Jersey.

After nineteen years of coaching hockey, he is returning to his roots of youth hockey to assist his son Derek. 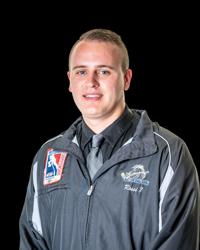 Jamesy Rossi was part of the Sir Skate Stingers Roller hockey program since the age of 5, until Galactic Ice’s opening in 2000.  He was part of the first squirt banner raising team with the Altoona Trackers, in 2001.  With the Trackers and Mustangs programs, he was a part of the first two U18 AA PA State Championship teams (one with the Trackers in 2008 and one with the Mustangs in 2010).  At the 2010 National Championships, Jamesy placed first as the Overall Skills Competition winner.

In High School Hockey, he was part of the only team out of Galactic Ice to play PIHL Varsity AAA during his Senior season with the Altoona Mt. Lions. During his senior year, he was the leading scorer in Western PA in the PIHL Varsity AAA division, with 55 points in 20 games. He proudly played alongside his fellow coach, Derek Mathews, as line mates for almost their entire career.  The passion of his coaches and peers in the past, have drawn him back to become a coach, to help develop the players on and off the ice. 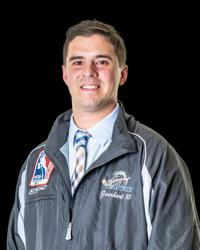 Coach J.R. grew up in Altoona, Pa.  He started playing roller hockey for the Stingers travel program at the age of seven.  When Galactic Ice opened in 1991 he was on the Tracker squirt team that brought the first banner to the rink. Throughout the years he was a defenseman on several banner winning teams for the Trackers, and a key member of the Mid-State Mustangs program.

J.R.  was on the first two U18 AA PA State Championship teams (one with Trackers in 2008 and one with Mustangs in 2010).  He also played on Altoona jr. High and High School teams and was a part of the only PIHL Varsity AAA team during his junior year of high school.

After high school, J.R. went on to play in college for Penn State Altoona, serving as the team Captain in 2012.  Additionally, he was selected to play in the College Hockey East (CHE) all-star game in both 2011 and 2012.

The knowledge and life lessons he has learned through hockey led him back to coaching alongside his past teammates and lifelong friends.  He brings a strong defensive minded specialty to the staff and he implements that into his training philosophies.

Coach Steve Miska, originally from Kittanning, PA moved to State College at a young age with family for work.  Having relatives in western Pennsylvania ingrained in the hockey culture at Belmont Arena home of the Armstrong Arrows had it's perks and it wasn't long before he was on skates thanks to encouragement from his Dad Steve, Mother Donna and Uncle John.  As soon as he was able he was on the ice at Greenburg Sports Complex at Penn State playing house league hockey ran by friend and mentor Coach Joe Battista the "Godfather" of Hockey Valley.  At the age of six Steve was able to join the State College Icers and play an independent and PAHL A, AA schedule from 1987-1999.  Coach Miska's youth hockey career finished strong with a great PAHL AA season as well as being nominated Captain of the first State College High School Varsity Team and CPIHL Champions in 1999.  Coach Miska looks back on those days as some of the best times in his life and feels grateful to all his coaches especially Scott Cranston and Mark Horgas.

Tough decisions about what to do after high school were made and stepping away from hockey was very hard but with the help of his Dad, Steve started a business called Signature Engraving in State College, married his high school crush Tryphena and together have two awesome children Adam and Addison.   Before you know it history repeats itself and his kids are following his foot steps loving hockey.

Coach Miska is known as a motivator who wants players to be the best they can be on and off the ice because grades, attitude, work ethic, coachability and being a part of a team matter.  Coach Miska loves high intensity practices focusing on skills, power skating and hockey sense and is greatful for the opportunity to grow the game of hockey in Central Pennsylvania.

After moving to Bucks County, PA from Palm Beach County, Florida in 2008, David Mueller was quickly introduced to the game of hockey and that love has never faded.  He quickly made the progression from floor hockey, to roller hockey, to ice hockey, and ice hockey has been his focus since the age of 10.  David is in Altoona as a 4.0 college student pursuing a Finance degree from Penn State University in the class of 2024, and he was recently awarded the President’s Freshman Award at the end of last school year.

His playing career is representative of his character and leading nature as he often captained the teams that he played for.  Out of his two seasons with the Philadelphia Revolution while he was only just starting ice hockey, David was voted as a one time assistant captain and one time captain.  Out of his five seasons with the Grundy Senators, David was voted and nominated as a two time captain and a two time assistant captain.  Additionally, for David’s high school, Council Rock South, David was nominated as a two time captain, received the “Most Dedicated Player Award” in his sophomore year, was named to the league wide second-team in his senior year, captained CRS to an SHSHL championship title in 2020, and was the sole program “Matt Harrington Scholarship” recipient in the year that he graduated.

Looking at his past in coaching, while playing travel and high school hockey growing up, David volunteered as a two year assistant coach with the Council Rock South Middle School AAA program and a one year assistant coach with the Wintersport Royals 12U Team.  In the off season, David stays close to hockey through working at Camp Chill Summer Camp and Hot Shotz Summer Hockey Camp, as well as assisting with various Learn-To-Play programs like Little Pens while in Altoona and the Flyers Learn-to-Play Rookie Program while in Bucks County.

David has never been more excited to return to the youth hockey world to represent the Mid-State Mustangs as a head coach to continue his passion for hockey and take his love for the game even further.  Team building, unity, structure, work ethic, and effort are all only some of the key points that David looks to incorporate in his coaching strategy as he looks to grow the love of the game for the players while they progress and develop as both a player and a person through the Mustang program.